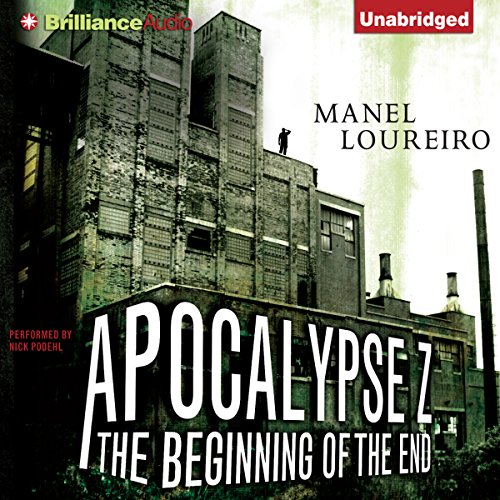 The Beginning of the End: Apocalypse Z

A mysterious incident in Russia, a blip buried in the news - it’s the only warning humanity receives that civilization will soon be destroyed by a single, voracious virus that creates monsters of men.

A lawyer, still grieving over the death of his young wife, begins to write as a form of therapy. But he never expected that his anonymous blog and journal would ultimately record humanity’s last days.

The end of the world has begun…

Governments scramble to stop the zombie virus, people panic, so-called Safe Havens are established, the world erupts into chaos; soon it’s every man, woman, and child for themselves. Armed only with makeshift weapons and the will to live, this survivor will give mankind one last chance against…Apocalypse Z.

RazorGrrl
3,0 de 5 estrellas Decent, if unexceptional story, with sometimes irritating translation
Revisado en el Reino Unido 🇬🇧 el 26 de octubre de 2017
Compra verificada
I must say, it's a novel experience, and a nice change, to read a zombie Apocalypse story that takes place in mainland Europe - Spain, no less. It gives the action a veracity, and a whole new perspective, as well as the chance to compare the European experience with the ubiquitous American one.

One of the first things I wonder about when I start any new "zombie apocalypse" book is if the author has set his or her story in a world where zombie books/films/TV series etc for entertainment, already exist... In this case, they don't (or, at the very least, the narrator seems unaware of them. The Z word hasn't been mentioned as yet, at least outside of the 'Z' of the title. I'm not sure whether this makes his supposed reflection of reality more or less 'real'. All the places he talks about are real-world places, the TV channels (CNN, CBS etc) are real, even politicians, such as Angela Merkel, are named, so I find the protagonist's apparent ignorance of, or at least lack of reference to, "The Walking Dead" or "World War Z" a little jarring.

On the plus side, in the early chapters the author manages to ramp up the tension nicely. The main protagonist, making his preparations while listening to and reporting on the growing crisis, is well handled, and the writing manages to convey the ominous feeling of a gathering storm, and of governments, as always, struggling to control the crisis, and trying desperately to close the stable door long after the horse has bolted.

Once the narrator leaves the safety of his house and the action really gets going, the pace never slackens, and the whole thing rolls along nicely, with just the right ratio of frantic action to moments of 'down time' and contemplative breaks, to keep your interest, and keep you reading.

One minor gripe - as early as page 16, Loureiro commits the cardinal sin of refering to his viral outbreak as a 'GLOBAL pandemic' a fundamental bit of stupidity. Anyone writing a 'zombie/virus/apocalypse" novel really should know better...The definition of the word 'pandemic' already includes/ implies that it's world-wide...That's what 'pan-demic' means...You can have a 'global EPIDEMIC' or a 'PAN-demic'. Not both...Irritating, so early on, and doesn't bode well for the rest of the novel.

There are a further 2 books to go in the series, although to his credit, the author hasn't ended Volume 1 on such a desperate cliffhanger that you feel cheated into buying Volume 2... The lone narrator (and cat !) has now been joined by a nubile (naturally *sigh*) teenage girl, a taciturn former soldier and, conveniently, helicopter pilot from Eastern Europe, and, believe it or not, a nun...and the four of them (and cat) are, rather predictably, flying off into the sunset (well, not quite, but near enough) to look for other survivors. If the narrator wasn't so likeable, I would probably not carry on with the rest of the series. But right now, I'm not sure...
Leer más
A 9 personas les ha parecido esto útil
Informar de un abuso
Traducir reseña a Español

Amethyst Moon
5,0 de 5 estrellas Excellent fast paced zombie apocalypse!
Revisado en el Reino Unido 🇬🇧 el 10 de octubre de 2013
Compra verificada
This is the first book I've read from Manel and I'm hooked, what a fab read. Those that follow my book reviews will have noticed I love reading apocalypse/zombie style books and believe me Ive read alot good and bad. Im always looking for that next amazing read that stands out from the flooded market of zombie-esk books and this does infact it stands way above the many Ive read.
Im actually buzzing from reading Apocalypse Z its one of the best Ive read, I have literally just finished reading the second one on the series; Dark days as I couldn't bare a gap in between; I couldnt stop reading and HAD to know what happened next; that's how addicted I was to this fast paced flow and brilliant natural characters.
This book the first in the proposed trilogy has been written slightly differently compared to other books in this genre and I wasn't sure in the beginning if I would like the blog/diary style, but I really grew to love it, it was easy to follow and Manel is fantastic at adding details so we feel like we are really there. He builds suspense even though its sort of in the past tense as its already happened (as the main character is writing his blog)....if you get what I mean.
The fact the main character is a simple lawyer thrown into the worst possible situation and has to survive and learn skills fast to stay alive is just brilliant, this makes him relatable and so very believable to almost everyone. His no rambo or big movie star or wrestler, his an ordinary guy whose mourning the loss of his beloved wife and lives alone with his cat. I love this arrogant Persian, but I'm not sure how many cats would not be scared and just run off, his almost like a pet dog which is fab, but ...phew thank you Manel for not making him meet any grisly end; I'm so relieved as a cat lover lol ;-)
What makes this book is just how much Manel makes us care about this guy trying desperately to survive and is thrown from one disaster to another, but its not over the top like some books it flows so well and we follow him through these trials, his nerves, anger and upset and its great he doesn't make stupid mistakes and your not yelling at the book to not go down that road or through that doorway.....again its sooo believable. He makes real informed decisions that make sense for that situation...yay!
He meets up with Ukrainian pilot Viktor "Prit" Pritchenko,and they form an unlikely friendship that's lasting and make a great team together. A lawyer, a Ukrainian helicopter pilot and a cat fighting the undead just trying to survive.

The ending cliff-hanger will make you want to buy the next book Apocalypse Z Dark Days immediately like I did at 3 am this morning lol. I couldn't have a break in-between lol. I spent 2 sleepless nights reading each of the books and it was worth it, its not often I read through the day too, but I literally couldn't put this down.

Its a fantastic read that slightly different to the usual apocalypse style zombie books, it was originally written in Spanish but has been translated perfectly, this was a worry for me as I thought it maybe broken English but it wasn't.
I really really enjoyed this book and highly recommend this to those that have read many of this style that want something a bit different with some fantastic original ideas to survive... a wetsuit!
Buy this you wont be disappointed.
Leer más
A 2 personas les ha parecido esto útil
Informar de un abuso
Traducir reseña a Español

Intertwining Vines
4,0 de 5 estrellas Page Turner
Revisado en el Reino Unido 🇬🇧 el 3 de marzo de 2013
Compra verificada
I picked up this book because I asked a friend who is a zombie fan, which was the best zombie book he has read and he suggested this one.

I couldn't put the book down. The journey the main character (whose name you never get to know) goes through is exciting and pitched full of danger. I laughed at the fact he goes out fighting zombies in his diving gear which gives him protection and a lot of strange looks. Good job since he gets bitten at least twice. Zombie immunity!

There were loose ends that unfortunately the book didn't tie up, such as the fate of the enemy ship and the contents of the suitcase which was a shame.

But overall the book was believable (for a zombie story).

I'm aware the book was originally written in Spanish and the translation is good, though not perfect. About a hundred times you will read text patterns which will annoy you.

Although, not the best zombie book I've ever read, it is still worth a read.

EDIT: A few months later, I've descovered this book has a sequel, which may explain some of the loose ends which weren't tied up. I've also read many other zombie stories since then; One I highly recommend, especially if you're into comedic zombie action would be Zollywood, by K. Bartholomew - Highly entertaining read.
Leer más
A una persona le ha parecido esto útil
Informar de un abuso
Traducir reseña a Español

Tremse
5,0 de 5 estrellas Absolutely amazing and thought provoking!
Revisado en el Reino Unido 🇬🇧 el 9 de noviembre de 2013
Compra verificada
I love a good Zombie tale and this is a really good Zombie tale! I wasn't sure I'd like a book written in the style of a blog but this work very well and I became totally absorbed in the story and the fate of the writer and his cat Lucullus after a plague engulfs the world.

Like all good stories, this one starts innocuously enough with an incident in Russia that hardly anyone takes notice of, and builds into a terrifying situation, told by a survivor of the fall of modern civilisation. As he says, the most civilised are the ones that have the most difficulty coping, whereas those whole live in remote, third world places live daily without running water, electricity and medical care.

Like Stephen King's 'The Stand' and 'Cell' and Richard Matheson's 'I am Legend' and more recently Justin Cronin's 'The Passage' and 'The Twelve' - the apocalyptic world described will make the reader wonder how they would cope in the same circumstances. If you liked all or any of those books, you'll love Apocalypse Z.

Natasha W
4,0 de 5 estrellas Genuinely scary....
Revisado en el Reino Unido 🇬🇧 el 16 de noviembre de 2013
Compra verificada
I read a lot of horror and love shows such as 'Walking Dead' so even though I was unfamiliar with the author I thought I would give this a go.

It was a great read..... genuinely couldnt put it down!

Unlike some of the other reviews I actually liked the build up to how it all happened - the slow descent into chaos seemed more realistic. This 'could it really happen' feeling is what made me enjoy the book so much and resulted in a couple of nights where I lay awake with my mind planning out what I would do in such a situation!

I have dropped a star only because I initially found the blog style confusing and when starting a new chapter, and therefore a new date, had to keep on flicking back to remember how long it had been since the last entry.
Leer más
Informar de un abuso
Traducir reseña a Español
Ver todas las reseñas