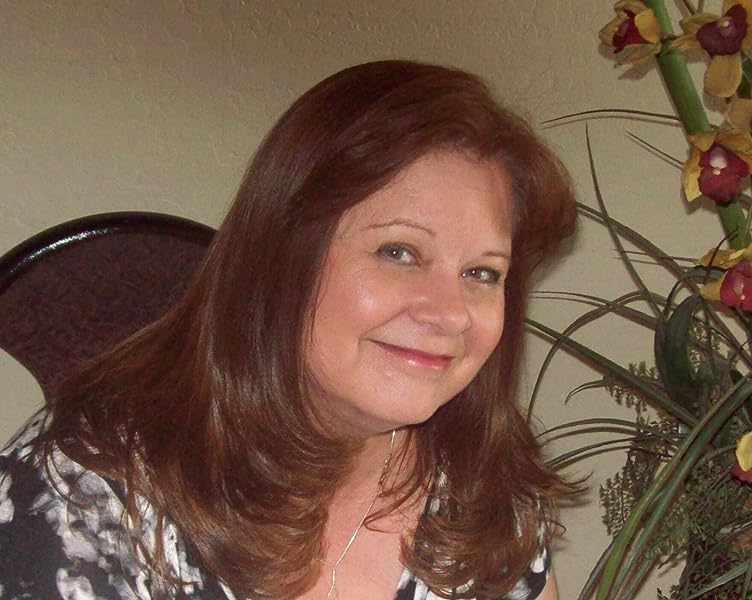 Culinary Cozy Mystery ─ Recipe Included ─ An amateur baker, a detestable HOA president, and a murderer blend up a delectable, humorous cozy mystery. Andi Stevenson, a teacher who spends her free time baking cookies, knew her life would never be the same after purchasing her new condo on Euphoria Lane. She mistakenly thought it would be for the better. On day one, she finds the body of the homeowners’ association president. Day two, she discovers the property manager is her former fiancé. Day three, the new president begins his campaign of violation letters to force her to move. Day four, her sister, the owner of a detective agency, needs her help with the investigation of the murder. And day five ends in a full-scale neighborhood war! Can Andi bake a plan to return harmony to her neighborhood and catch a murderer without getting burned?
Leer más
Previous page
Next page

Tina Swayzee McCright is an award-winning author of romantic mysteries. She lives in Arizona with her wonderful husband, in an HOA community, where she once served on the board. She has a BS in Communications and an MA in Curriculum and Instruction. Although she has been an educator for over twenty years, she believes her greatest accomplishment was raising an amazing daughter.

Thomas
4,0 de 5 estrellas A solid myster
Revisado en los Estados Unidos 🇺🇸 el 4 de enero de 2022
Compra verificada
Andi is an Elementary school teacher who moved into a housing development over spring break.
While taking her first load out to the dumpster she finds a body already there.
The body belongs to one of the corrupt leaders of the HOA, and Andi quickly learns why someone would want the board members dead.
Jessie, Andi's sister who moves in with her is a police officer on an undercover assignment, giving the board leaders even more reason to not like the newest residences in their community.
Jessie has also recently purchased a detective agency, and as she can't run it until her undercover assignment ends, she asks Andi to step in and ask questions for her.
This is a decision Jessie will come to regret.
As the story progresses several of the other members are attacked as the residences have had enough of the phony fines being handed out on a daily basis.

Pro's:
This is a good story with developed characters, a little humor, and a lot of intrigue.
You can disregard the cover for this one.
It reads more like a traditional mystery than a cozy due to the violence and attacks involved.
It is a clean read and I will definitely be reading more of this series.

Con's:
The romance part of the story gets to be a bit tedious before it settles into the story smoothly.
While this part of the story never takes over the storyline, leaving the story very much a mystery, the back and forth POV's about their previous relationship failures (both his and hers) got old after the 4th time of their recollections.
I was really glad when they finally decided to put the past in the past and see what the future may hold for them.
Leer más
A una persona le ha parecido esto útil
Informar de un abuso
Traducir reseña a Español

This was an enjoyable book, but it just wasn't great for me. The main character, Andi, just purchased and moved into a new condo, and has all the warm and fuzzy feelings someone has when they get a new home. But things take a nosedive fast, when she learns the Home Owners Association (HOA) has so many petty rules without definite guidelines, and the members of the board make it the HOA from hell. For one example, Andi gets fined for having 2 leaves on her back patio. (It is supposed to be clean at all times.) All the residents are getting fined like crazy. Meanwhile, the president of the board is found dead, and there is so much animosity between the homeowners and the board that anybody could have killed her. Things go from bad to worse, quickly. If something can go wrong, it does. Other people start disappearing. Meanwhile, conveniently, Andi finds out that the Property Manager for the Condo development happens to be her ex boyfriend, who dumped her in college and she never quite got over him. So there is A LOT of interpersonal drama going on here.
This book is written in a way that indicates there is meant to be lots of humor in the various situations and conversations. Somehow, it just didn't work for me, though. It was slightly amusing at times, but there were no laugh out loud moments. It was cute and somewhat interesting, but it just didn't have me riveted to my seat.
I will say that the book was well written, only a little confusing (because of the number of characters), and true-to-life in showing the tensions between homeowners and management/board members in general. It's just didn't quite live up to the expectation I had for it.
Leer más
A 13 personas les ha parecido esto útil
Informar de un abuso
Traducir reseña a Español

Illinois Reader
5,0 de 5 estrellas I was ready to kill the President of the HOA myself the way he treated home owners!
Revisado en los Estados Unidos 🇺🇸 el 16 de abril de 2016
Compra verificada
I am a big fan of Kindle Scout and getting to nominate books to be published. That's what I did with Euphoria Lane. So when I got a copy free for nominating it, I wanted to see if it would be as good as I hoped. Since it had been awhile between receiving and reading the book, I didn't know what to expect. What I ended up with was a murder mystery with multiple good possibilities for the identity of the murderer. What I didn't expect was to learn about how awful some HOA actually are! Euphoria Lane was supposed to be the beginning of home ownership for Andi Stevenson-a chance to have her own house instead of unsatisfactory apartments. Sharing the house with her sister, a police officer currently undercover, seemed like a good fit. When she moves in and meets the property manager, it turns out to be her former fiance. That would be shock enough, but on her first trip to the dumpster, Andi discovers a dead body. It doesn't take long for the HOA President to express his dislike for the new owners, and begin a campaign to get rid of them and hopefully pin the murder blame on them. Andi decides to investigate and try to find the murderer. Her sister, deep undercover as a slutty waitress at a nearby bar being investigated by police for gambling, etc, also is in the process of buying a PI business. Although Andi is a teacher, school break allows her time to become completely embroiled in the murder and the PI business. The results are investigations that are aided by her former fiance and a couple new neighbors. Funny at times, nail biting at others, Andi plows ahead and keeps investigating through all kinds of disasters and problems. I like the way the other characters developed through the story and became stronger, as well as leaders in the community.This turned out to be a good mystery with an ending that was not what I expected. Throw in the romance of reconnecting with her former fiance, and you have a delightful book that was enjoyable from start to finish.
Leer más
A 7 personas les ha parecido esto útil
Informar de un abuso
Traducir reseña a Español

Reader
5,0 de 5 estrellas Pretty Interesting Tale
Revisado en los Estados Unidos 🇺🇸 el 14 de diciembre de 2015
Compra verificada
Having myself once rented a house in a community where the Home Owners Association (HOA) was less than accommodating to association members, I could easily relate to this story. In this one, Andi Stevenson, a school teacher, and her sister, a cop on an undercover assignment, move into a condo where the HOA does everything it can to make life miserable for the association members, levying fines for absurd rule breaking, spying on the members and their homes, devising ridiculous rules no one could ever abide by, etc. To make matters worse, Andi’s one-time college squeeze is the HOA manager. As the story unfolds, the Andi and her sister confront association board members’ dead bodies, possible serial killer or killers within the community, unbelievable and absurd prejudice by the board members, and, in Andi’s case, the reality that her one-time college love may have been a lot more than that. The story flows along smoothly and quickly. My only question was why the association members let things get so far out of hand without taking some legal action. Late in the story, there is a feeble excuse given for this, but the excuse is just that, feeble. At any rate, this is a pretty good cozy mystery, with just enough reality and mystery, mixed in with the idea of romance between Andi and her one-time guy, to make things interesting. I enjoyed watching Andi and Luke, the HOA manager interact and rediscover their college romance, while Andi contrived with a few association members to track down and uncover clues about the board members and the deaths that occur. Though playing a minor role in all this, Andi’s sister as well as the few other neighbors who were helping Andi change things also lent to the intrigue and interest throughout the story. The author kept the tone light, though, in most cases, the situation was, I think, quite serious. The book also showed just how powerful association boards can become and how nefarious power hungry board members can become—if the members let them.

I have not read anything else by the author but will, after reading this one, add her to my list of authors to look for and read. Her style is smooth and light but definitely attention getting. The plot was realistic and attention getting. Characters were well developed, interesting and regular people. I think anyone who enjoys cozies that are a quick read and very enjoyable will like this book. I received this to read and review through the Kindle Scout Program.
Leer más
A 3 personas les ha parecido esto útil
Informar de un abuso
Traducir reseña a Español

Kindle Reader
3,0 de 5 estrellas A suitable read!
Revisado en los Estados Unidos 🇺🇸 el 29 de julio de 2017
Compra verificada
For Andi, moving into her first condo seemed like euphoria...until she finds a dead body in the dumpster and all the HOA fines start coming through. Geez, it seems like you can't even turn around without breaking some sort of violation from the homeowner's association. There was just too many rules! And if the dead lady in the dumpster was part of the HOA board, then any one of the neighbors could've killed her.

It would seem the town reverend is the prime suspect in the murder, but Andi doesn't think so. Of course, she didn't really set off trying to find the killer. She just sort've fell into the gig in the midst of fighting the jerk president in charge of the HOA board. And it would seem that everyone in town had an opinion to who dunit.

This little mystery was pretty engaging overall, but it was a little confusing keeping up with all the assumptions and the clues. I mean, it didn't quite make sense right away. And the fact that we were dealing with an amateur sleuth didn't make it that much more engaging. But I did feel for Andi as she helplessly fought to keep the HOA off her back, while, at the same time, trying to evade a killer.