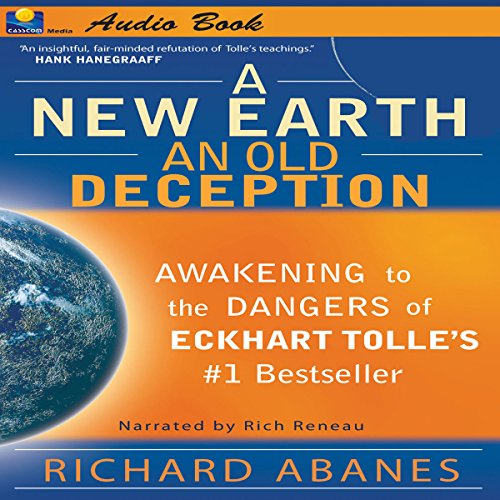 A New Earth, An Old Deception: Awakening to the Dangers of Eckhart Tolle's #1 Best Seller

Richard Abanes (Autor), Rich Reneau (Narrador), Casscom Media LLP (Editorial) & 0 más
3,5 de 5 estrellas 13 valoraciones
Ver todos los formatos y ediciones
Sorry, there was a problem loading this page. Try again.
Abanes has presented solid answers in his book to those confused by the proclamations of Eckhart Tolle by revealing and reassuring the Truth to Christian and non-Christians alike. This audio edition captures the essence of the message and feel of the book.
Leer más
©2008 Richard Abanes (P)2009 Casscom Media
Previous page
Next page

keepthafaith
1,0 de 5 estrellas Disappointing!
Revisado en los Estados Unidos 🇺🇸 el 6 de noviembre de 2012
Compra verificada
I was deeply moved by Tolle's "A New Earth". I am a Christian. I was hoping for a cogent assessment of Tolle in relation to Christianity. Sadly, Richard Abanes writes from a confusing and narrow box.

I wll give two brief examples, but there are many, many, "logical" points that just don't make sense. Abanes quotes Tolle as saying "His Truth...can only be found by intuition, internal knowing, and emotion". He tries to "prove" that feelings are not a reliable standard by which to measure truth. But churches teach this consistently, often telling of "spiritual sight" and faith that cannot be explained, only felt. Abanes says Tolle makes judgements about what is good, bad, right, or wrong, and quotes from New Earth, (for example, wars, exclusive religious claims, the witch hunts of Europe, materialism, sickness, addiction). So, what is the point? Is Abanes trying to say these things are't bad or wrong, but Tolle is judging them so? Am I incorrect in assuming there are some universal moral wrongs? I don't think Tolle is alone here.

Abanes does just about everything he accuses Tolle of doing in his writing, and left me with a "we Christians are the only worthy truth bearers" feeing.

Mark Twain Ha
1,0 de 5 estrellas Tolle's critic is a spin doctor
Revisado en los Estados Unidos 🇺🇸 el 3 de mayo de 2009
Compra verificada
The author quotes tolle as saying "every belief is an obstacle". Then the author claims that tolle redefines other beliefs as mere "mental concepts". But Tolle never says "other beliefs". And the author claims that tolle says; accepting his beliefs is entering into "a state of consciousness." But in fact tolle never asks you to accept his beliefs. This is all the authors own spin.
Tolle says that "every belief is an obstacle". The author claims this is a belief about beliefs. But here is the problem. The definition of the word belief is; an acceptance that a statement is true or that something exists.
Tolle never asks you to accept anything.
Leer más
A 44 personas les ha parecido esto útil
Informar de un abuso
Traducir reseña a Español