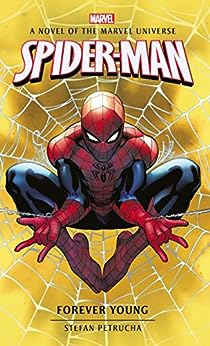 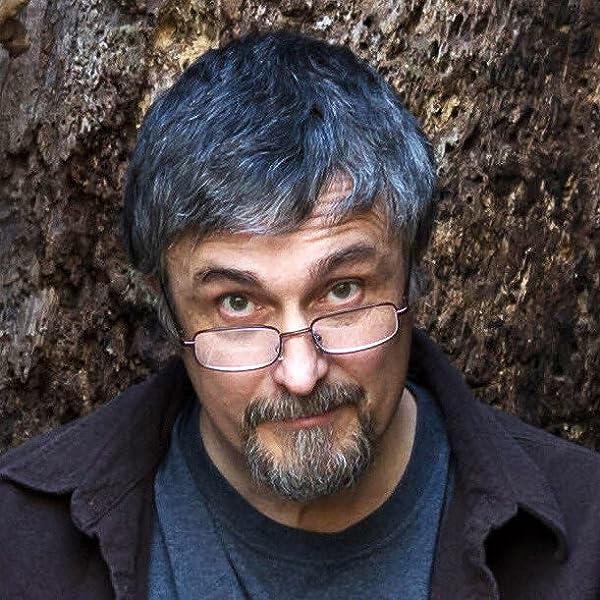 Sixth title in Titan Books’ Marvel fiction reissue program, featuring the Spider-Man story, Forever Young.
Take a swing through Spider-Man’s past!
Hoping to snag some rent-paying photos of his arachnid-like alter ego in action, Peter Parker goes looking for trouble—and finds it in the form of a mysterious, mythical stone tablet coveted by both the Kingpin and the Maggia.
Caught in the crosshairs of New York’s most nefarious villains, Peter also runs afoul of his friends—and the police! His girlfriend, Gwen Stacy, isn’t too happy with him, either. And the past comes back to haunt him years later when the Maggia’s assumed-dead leader resurfaces, still in pursuit of the troublesome tablet. Plus: With Aunt May at death’s door, has the ol’ Parker luck disappeared for good?
A novel based on the classic “Stone Tablet Saga,” adapted and expanded for the present day.

Stefan Petrucha has written over twenty novels and hundreds of graphic novels for adults, young adults, and tweens. His work has sold over a million copies worldwide. A fan of comic books, science fiction, and horror since learning to read, he soon found a love for all sorts of literature, eventually learning that the best fiction always brings you back to reality--so, really, there's no way out. --Este texto se refiere a la edición mass_market.

Justin
4,0 de 5 estrellas Great Story
Revisado en Canadá 🇨🇦 el 26 de mayo de 2021
Compra verificada
This is the third book I have bought like this, my Son loves them and I prefer them for him because their are no pictures just good stories with the characters he loves. So for a learning purpose it is better then a comic book in my opinion.
Leer más
Informar de un abuso
Traducir reseña a Español

SPIDERMAN: FOREVER YOUNG is a loose adaptation of the classic "The Lifeline Tablet Saga" that deals with the Kingpin trying to steal a stone tablet from the university, the mob boss Silvermane discovering it contains the secret of eternal youth (which he desperately needs), and Peter Parker trying to deal with his various responsibilities to the people in his life.

This isn't really the greatest of Spider-Man stories to adapt to either book format or graphic audio. I actually listened to the latter before switching to the former. The characterization is fine but it's a bit on the shallow side with the Kingpin being pre-Daredevil and thus not nearly as menacing or personal in his fight against Spider-Man as he would be against Matt Murdock.

Silvermane is actually the most interesting villain in this story as the 80+ year old man is on the last years of his life in a society that only respects strength. The tablet represents a chance at a new life that he won't be able to enjoy otherwise. He's also a vicious, murderous old creep that is no less dangerous for the fact he only has weeks to live.

One frustrating element of the story is that Lee and company lean heavily into the fact Peter Parker is viewed as a coward by his friends because he's always running away from danger due to being Spider-Man (and needing to change). This is a ridiculous thing to worry about as anyone not running away from gunfire is an idiot and it's not like any of them were doing anything. It really only works as a dramatic irony from our protagonist. Given Peter is also running into danger, as far as they know, to take photos then this is doubly ridiculous.

The character of Gwen Stacy shows up for a decent chunk of change as we see her as an activist, science student, and beloved daughter of Captain George Stacy. She is saddled with worrying over whether she's in love with a "coward", though, and everytime that shows up--the storyline becomes less enjoyable. Still, it's awesome to see her in her prime and I regret that she didn't show up in the latter half of the book (set after her death).

Vanessa Fisk is also a character that changes a great deal from the way she was initially presented to the woman we know from things like the Daredevil TV show. Here, she's an ethereal depressed woman who is the Kingpin's one anchor to sanity. There's none of the darker side to the character we later encounter.

In conclusion, I enjoyed this book but it is very flawed with a few serious missteps in their desire to make us feel for Peter Parker's inability to manage his secret identity. It was a thing they relied on heavily during this time period but it just didn't work as well for me as it could have.
Leer más
A 4 personas les ha parecido esto útil
Informar de un abuso
Traducir reseña a Español